Here's something people can make without a prolonged hunt for ingredients! The 'Reviver' ginger, cinnamon, lime drink for one is an infusion and a concentrate - to be mixed like a large drink, with chilled soda or water .
Ingredients:

Scrape the skin off the ginger and crush it with the cinnamon sticks. Tie the crushed mix in a piece of fine cotton/muslin.
Bring water to boil, drop in the spice bundle, simmer together for about 20 to 30 minutes  till you have a dark amber infusion (and the house is also redolent with the fragrance of the spices!). Add the sugar and stir to dissolve it into the infusion
Take it off the heat and cool. Now add the glass of lime juice. Bottle.
This has no preservative and must be kept in the refrigerator and used up in two weeks.

The secret to this is fresh coconut milk.This is made from combining gratings from half a coconut and I cup warm water, running it in a food processor for a minute. Strain and keep the thick milky extract.  Add one and a half cups more warm water to the  dregs and repeat the process to get the weaker second extract.
The coconut cream/powder you can buy there should be almost as good!
Beans chopped, carrots and potatoes cubed, cauliflowers..well...flowerlet-ed(!), peas etc all together about one and a half - 2 cups
One onion sliced thin
A small piece of fresh ginger julienned
2 Green chillies split (or more to your taste)
About 5 whole peppercorns crushed
4 cardamoms
6 cloves
1stick of cinnamon
A sprig of curry leaves if possible
A tablespoon of oil and salt to taste.

Heat the oil in a pan/wok,(add curry leaves first) add the cardamom, cloves, cinnamon and pepper. Then add the chillies, onions and ginger and cook till the onions start browning. Add the vegetables and sauté for a minute till everything is well blended. Sprinkle the salt and add the second extract of coconut milk. Simmer till the pieces are cooked. Now add the thicker first extraction of milk, stir and remove from the fire immediately. Goes well with bread etc
Posted by Julia Gregson at 16:48 No comments: 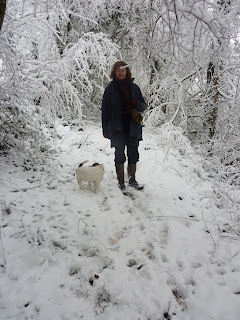 Hard to believe that this  time last week, I was in Kerala on a rice boat,  researching Book Four. This week, I'm gritting paths and putting out bird seed  in  Wales where four inches  of snow fell last night, and the woods and the fields near the Wye are covered.  The dogs think it a tremendous lark and have been playing in it for hours, their paw prints make  neat  lino cuts in the virgin snow. 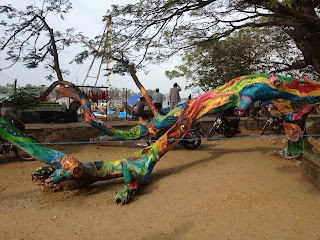 But back to Kerala , it's warmth, it's bright colours seem, even after a week back,  like a  seductive dream.
After one night in  Fort Kochi -where the Art Biennale is on, and where someone had transformed the branches of a huge Banyan tree into  a  snakes and dragons tree -  I based myself at  Olavipe, a Homestay ( the Indian name for a B and B), belonging to  the Tharakan family.
Although the  Tharakans  are one of the oldest Syrian Catholic families in Kerala,  there is nothing grand or intimidating about the atmosphere here. The house, with its spacious verandahs, its cool whitewashed rooms, its  rosewood four posters and its  antique furniture, is as beautiful as it is welcoming.  Its grounds -  60 acres of farmland,  surrounded by lagoons, farmland and rice paddies,  are yours to wander through for as long as you stay.
The food was fabulous, often served on banana leaves or in simple bowls laid out on the long table for you to help yourself . Guests are invited to wander into the kitchen, or explore the house, make tea. What I  liked was the sense you have of having your own set of rooms within the house.  The rooms , every bit as big as you'd get in a luxury hotel , were scrupulously clean and quiet. You have the option of using a servant to make your bed, but I chose not to for the pleasure of imagining that this house  was my home, I settled in so thoroughly that I actually had to warn Anto and Rema that adoption papers would follow.
The farm is plentifully supplied with  its own fresh fish, and organic chickens and vegetables and  I constantly marvelled at the skill and delicacy with which fresh vegetables, cabbage, beans, are turned with a pinch of cardoman and cinnamon and mustard seed into something genuinely exotic. I'll get Rema to send on some of the recipes so I can post them.
Here you eat with the family and a floating population of guests ( during my stay: the English publisher of 'Curious Incident of Dog at Night Time',  his 22 year old son, a magazine editor; two delightful women from Oxford;  an American  Aids worker from  Africa, and  an English carpenter). The conversation was lively and  interesting, but one was left in peace when you wanted to be.
Anto,  and Rema, are the most  relaxed and generous of  hosts, answered endless questions and, because I was interested in life in Cochin in the forties, took me to meet Rema's mother, Amma, (86) and godmother , Lily (94). 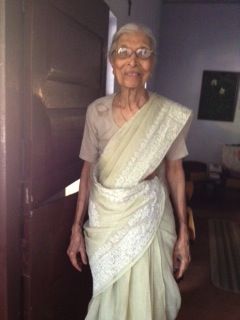 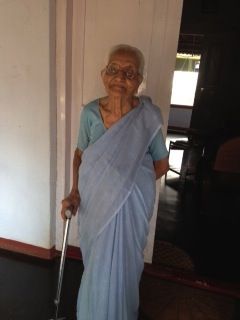 Lily and Amma  live in their own separate but close houses in a quiet close in a temple town called Trissur .  They share servants, meals, and when  their large extended  family comes,  the  pleasures and the work  of seeing  cousins aunts, siblings, sitting around Lily's long dining room table.
In their graceful saris, and with grey hair knotted at the nape of their necks, they looked so elegant, so serene, and yet neither had ever been to either a hairdresser or a beauty salon .  Food for thought  about the frantic efforts we're encouraged to make in the West to stave off old age. When  I got back - even my pared down travel  make up bag with its  age activated serum , its creams,   the mascara, the velcro rollers the lipstick, looked  bizarrely complicated.  Doesn't mean I'm going to step out now in a white sari and Rhett Butler  moustache, but  does make you think. The only beauty routine they followed  apart from baths and hair washing was a weekly scrub with vetiver, and the soft bark of a tree to exfoliate, followed by the application of coconut oil for hair and skin.
Both reminded me too that a well stocked mind is another useful attribute in old age.  Amma was reading a long and fascinating book on Indian history, 'Gem in the Lotus' written by Abraham Eraly, her nephew , and both agreed that one of the  best time of their lives had been when they'd both left home, aged 18 and  gone to live in a hostel in Madras in order to study for university degrees.
From Olavipe,  I went to on to Alleppey , and two days on my own on a rice boat 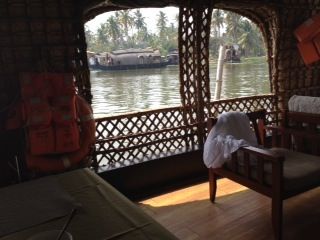 If you're ever in Kerala, trust me, take one . What I loved was  the perfect peace of it.  From a comfortably shaded wicker chair I gazed out at  a party of school children rowing themselves back from school across the river; a woman washing her curry pots in the stream;  an egret sitting on a grazing bullock's back; fishermen palm trees, sunsets.  Fresh fish and more delicious vegetables were served on that table on the left hand side of the photo, and at night, Mathu, the cook, lit a candle on the deck,and I sat and listened to the birds, and the chanting from a nearby Hindu temple.
Heaven, and now, back to reality. Where was that snow shovel ?

There are days to savour in the full knowledge that on the day after you will be back at home emptying the rubbish, or taking hair out of a plug hole. Yesterday was one of them. After weeks of rain I took a train on a bright sunny day up to London,where,at Paddington station,my eye was gladdened by the sight of a stand of 'Jasmine Nights.' prominently displayed in W.H.Smith. Yes, I've been Richard and Judied again,and couldn't be more thrilled. Nervous at the thought of joining them on the sofa at 2.30 p.m. I had my hair done at a posh hairdressers near Orion,and this elegant young man with three crucially arranged tattoos on his neck did my makeup. When I asked him where he'd trained he said he was a dry cleaner,which worried me a bit until he said,'no darling, DRAG Queen.' Great, I thought,I'm going to come out looking like Danny La Rue, all jewelled eyelashes and lipgloss,but he was tres subtle and sitting on the sofa with R and J, turned out to be nothing like as terrifying as I thought it would be. We had an interesting warm up chat regarding writing horror stories which Richard won hands down by admitting he had recently deleted three whole chapters of his new novel, and had wanted to shoot himself. This reminded me of the time, my dear father, showed me a carefully honed short story he'd recently written, and then absentmindedly mistaking it for his cigarette thrown it into the fire. It was interesting to meet some of the other R and J authors- Rachel Joyce, Chris Cleave, John Green- when asked for our nuggets of wisdom about getting stories written they were remarkably similar and down to earth: read a lot; write a lot,don't give up.
Posted by Julia Gregson at 16:52 No comments: