LIVING IN THE COUNTRY, and CROSSING BORDERS

We’ve lived in our welsh farmhouse, in this valley for nearly 30 years now. If a house could scowl, and show you its backside, it did on the wet November day when we first saw it, with the rain lashing down and the many ducks in its yard muddy and with their feathers standing on end from a sharp wind, not a living soul in sight.
No sooner was the ink dry on our contract when one cheery neighbour informed us , ‘This place is the graveyard of ambition,’ adding, ‘particularly for women.’

Good to know, and I sort of believed him, because I had an unspoken fear about moving to the country. What if here, it was well just too nice, and away from all the exciting anxieties of the city, I might not, do what I longed to do which was to write a novel, and find myself sliding day by day into the gentler pleasures, of lets say jam making or bell ringing.


It’s a version of the country, which assumes that a metropolis is where you find work, and the country is where you don’t. And that you either have to be one thing or another: a fully paid up member of the rat race, or dropped from some exciting group.


But it took only a few months of living here to discover that behind hedges, up dirt tracks, in little cottages tucked in the woods, the Wye Valley is a hive of industry for the many women who work here. 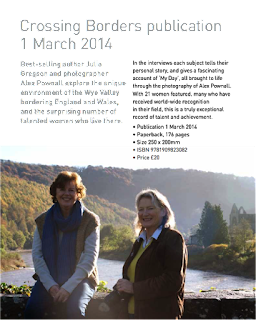 Two years ago, a photographer friend, Alex Pownall, and I decided to find out how they made it work, which led to our collaborating on, “Crossing Borders,” published by Graffeg .
At first we thought we’d cover the whole of the length of the Wye Valley, which runs from Rhyader in Wales, crosses the English Welsh border at Hay on Wye, and on down to the Severn Estuary.   In the end, less than an hour from our homes (Alex lives across the river in Gloucestershire)  we found an embarrassment of subjects : barristers, artists, economists, opera singers, teachers, a lady butcher, theatre designers, circus owners.

We didn’t set out to cover all occupations, or to write a self help book- simply to report on the lives of 21 women.

We called it ‘Crossing Borders,’ because so many of the women we interviewed seemed to have reached a point of change or crossed some personal rubicon, in order to find the job they loved. Some of these crossings were traumatic, some simply a question of having moved, or discovered they had started off in the wrong job. All of these women were refreshingly honest about the times when that old chestnut of work life balance was just not possible- their lives were as unpredictable and untidy as everyone elses.

After visiting them at their place of work: circus big tops, magic gardens, studios, lambing sheds, police headquarters, to name but a few, Alex and I had some interesting conversations on the way home.

We noted that many of our subjects were the daughters of farmers, policemen, airmen, factory workers.  Many had gone to comprehensive schools, and with few exceptions found work  (just as we had) through trial and error.

A surprising number had found their strengths after shocking reversals of fortune: Elizabeth Haycox, owner of Richard Booth’s Bookshop in Hay on Wye was widowed with awful suddenness, aged 43.  Race horse trainer, Venetia Williams, was all set to be a jockey until a near fatal fall changed the course of her life. 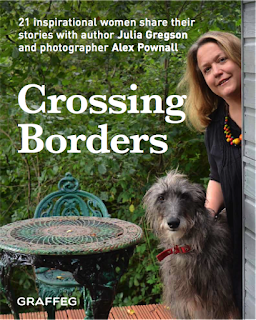 What linked them all was a sense of how integral to their daily routines the hills, valleys and rivers around them had become. Before picking up a paintbrush, the Ledbury artist, Andrea McLean, walks for two hours every morning in the hills above her house. Mezzo soprano, Catherine King runs for an hour most days in the valley her house overlooks, to keep her fit for singing.
Venetia Williams is out on her gallops next to the River Wye every morning.

And age? Well that was fascinating too. Some of our women were years past retirement age and still firing on all cylinders. Jean Miller, who sadly died last year at 83, discovered she was an artist at 63 after she moved to the country. The best time of her life, she said, with ‘No Saturday, and no Sunday,’ she was too busy producing the work for her sellout exhibitions. Revel Guest, the 81 year old producer of Stephen Speilberg’s ‘War Horse’, will this year produce opera and documentaries, as well as being Chair of the Hay Festival. Her house is in a remote spot overlooking the River Wye and invisible from the road.

We had a wonderful time writing and photographing these women. We hoped too that any school leavers reading this book, and possibly anxious about their prospects, would see it as a source of inspiration. That’s what it felt like to us.