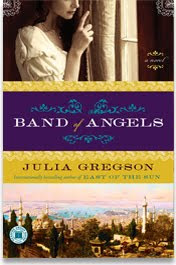 I'm excited because my first book, THE WATER HORSE, is about to be published in the U.S. with a new title, BAND OF ANGELS and a new and beautiful cover.

The story, which stayed in my notebook for years, began in 2003 when I set off on a retired show jumper, Fred, to ride across Wales. On my way home, I stopped at a village called Pumpsaint in mid-Wales where I saw a church plaque commemorating a woman called Jane Evans who, in 1853, ran away with the Welsh cattle drovers in order to nurse with Florence Nightingale in Scutari. I tried to find out what I could about Jane Evans, but drew a complete blank for the very simple reason that few of the nurses wrote anything down because most were illiterate. I decided then with great trepidation to try and write a novel. That lead to a number of walks and long distance rides across Wales, to explore the drover's tracks and later, a trip to Turkey with my then 80 year old mother - who was always game for a laugh.

It was snowing when we arrived, and on the first day, I took a ferry ride to check out what was then called the Barrack Hospital at Scutari on the Asian shore of the Bosphorus where Florence Nightingale and the nurses lived. The hospital - gaunt and terrifying even today - is now a military installation, but amazingly, when I asked if I could look at the tiny rat infested tower where the nurses had first slept, it was still there. Florence Nightingale's room was below. Her green chaise longue and her writing desk and her pens were all laid out as if she'd popped out briefly to tell the nurses off for being noisy, (they were an uruly gang) or to supervise the feeding of some beef jelly to a patient.

When I joined my mother again she was having a ciggie and a glass of wine in the lobby Pera Palace Hotel in Istanbul the hotel where Agatha Christie is said to have mysteriously fled to when she found out that her husband had been unfaithful to her. Somehow, my mother had got us invited to a Turkish wedding that night, by a friend of the bridegroom, a boy with magnificent dark eyes.

The wedding was great fun: tables groaning with food, lots of cymbals and wailing instruments and men dancing like Zorba. Late in the evening we were dragged onto the dance floor by a portly man who reminded me of the P.G. Wodehouse toff who'd ' been poured into his dinner suit and forgotten to say when .' He bowed low and proudly announced,' I Madame am the Commissioner of Istanbul, this,'he turned to the smiling woman by his side, 'is the Commissioner's wife, the Commissioner's car waits outside and will be happy to escort you home.'

There was a moment when I was writing East of the Sun when I nearly threw it in the stream. I can’t remember why exactly now, but it was one of those moments when you are a writer when you suddenly feel that this thing that has so thrilled and excited and kept you up at nights is about to be revealed as a cringey failure. Most writers I know have these crashes of confidence. Now I think they are simply part of the journey and you have to man up when they appear.

Anyway, I am so happy that this book is not at the bottom of the Wye. It’s taken me on an incredible journey: first, the excitement of getting the thing published at all – absolutely nothing is for sure in today’s precarious publishing world - then being chosen for the Richard and Judy Book Club last year. In February of 2009, it was chosen as the U.K.‘s Romantic novel of the year, and last week, I heard that I am on a short list of three for Le Prince Maurice Prize for Literary Love stories. Here’s what the organizers say about the prize.

This prize, now in it’s eighth year, aims to discover love stories of the highest literary quality that engage the heart as well as the head. The prize is awarded to an English-speaking writer every second year (alternating with a French-speaking winner), and the novels submitted cover love in one of its myriad forms. The authors must do more than just impress the judges with the quality of their writing - they must also have the capacity to move them.

The other authors on the short list are Sadie Jones, for ‘Small Wars,’ which was also on the Orange Prize short list this year, and William Sutcliffe, for ‘Whatever Makes you Happy.’ I’ve just ordered it on Amazon. Sadie’s I’ve read and thought was terrific.

When Kate Mills, my editor at Orion, phoned me in January to tell me I was on the long list, I thought she was having a cruel joke with me. I was sitting- long johns track suit, two sweaters –in our draughty farmhouse in what was then Sub-Artic Wales. She asked whether I would be available to go and stay, this June, for one week at the incredibly beautiful Constance Prince Maurice Hotel a five star hotel in Mauritius. This hotel is, I’m told, so wonderful that the likes of Michael Douglas and Catherine Zeta hang out there. Someone told me they have people around the pool to relieve you of the irksome business of polishing your own sunglasses. (Note to self, buy new sunglasses - I’ve never owned a pair for longer than about ten minutes. Also wardrobe? I don’t think my vintage summer wardrobe is going to cut it.)

Thank God Sadie will be there to have a laugh with. By strange and wonderful coincidence, I’ve known her since she was about 16. Up until a couple of years ago both of us were two distinct species of struggling writer. We’re still struggling writers - part of the addiction is knowing there is always so much more to learn.

Sadie served a long seventeen year apprenticeship writing screenplays in a cupboard in London. My apprenticeship was even longer, I was, for twenty five years,a jobbing writer, writing short stories, articles, (for everyone from Sandwich Monthly to The Sydney Morning Herald, Rolling Stone. I had an unpublished novel in my bottom drawer called ‘The Water Horse,’ which my husband persuaded me to take out. Another story. Anyway, the moral is, cast not thy novel upon the waters, you never know what might come thudding back.
Posted by Julia Gregson at 16:14 2 comments: